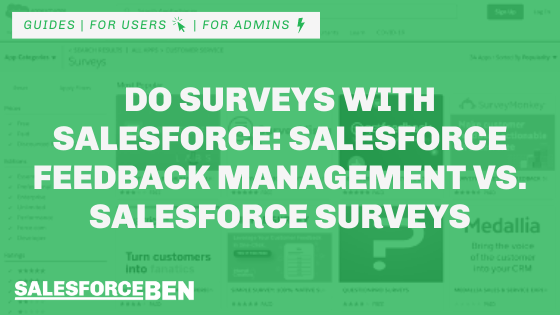 David is an independent technology consultant, focusing solely on salesforce.com since 2004. He started the Salesforce Surveys group on Trailblazer in 2018 when Surveys was released.

Surveys have always been an important aspect of maintaining a good customer relationship. For a product whose stock symbol is “CRM” (customer relationship management), surveys were a feature that Salesforce left to other vendors for quite a long time. Previously, if you wanted to do surveys with Salesforce, you had to use a third party product (typically from the AppExchange) and figure out how to sync data between the survey product and Salesforce.

Survey data management has become less of a challenge over time. Since the native Salesforce Surveys were launched, more options have been added to the market – including the brand new Salesforce Feedback Management product.

I have been using surveys with Salesforce since 2006, back when lots of Excel files were required to move information between survey tools and Salesforce. This guide provides an overview of the options available to do surveys in Salesforce, how we got there, and where these products are going.

Note: I am an independent consultant. None of the vendors mentioned in the article, including Salesforce, has ever compensated me in any way for my work with surveys. This is an independent evaluation of the survey market on Salesforce.

A Brief History of Surveys and Salesforce

Ron Hess, a developer evangelist at Salesforce, created SurveyShark back in 2009, a simple survey product constructed with four objects, a few apex classes, and a few Visualforce pages. The best part was that it was open source, free for anyone to download and install.

In August 2010, the product was packaged as SurveyForce and made available on AppExchange. As a Salesforce Labs product, it was still free, and the source code was still available, now on GitHub. Because it is not a managed package, it can only be used by orgs that have the ability to run unmanaged Apex, ie. Enterprise Edition and above.

The code base was recently given an extensive overhaul by David Schach to clean up the code, to update the permissions, to bring all the code up to API 49.0 (Summer 20 release), and to make it all compatible with SFDX.

But it was still a “use at your own risk” product. There is a fairly active group on GitHub for solving problems, managed by Jaswinder Rattanpal, a Senior ISV Platform Expert at Salesforce (he is quick to respond to questions and problems).

Some survey products did appear on the AppExchange in the years between, yet in the Spring 18 release, Salesforce finally introduced Salesforce Surveys. The initial product was a no-code solution, with all of the survey design and analytics done within a special Survey Builder (a flow application). 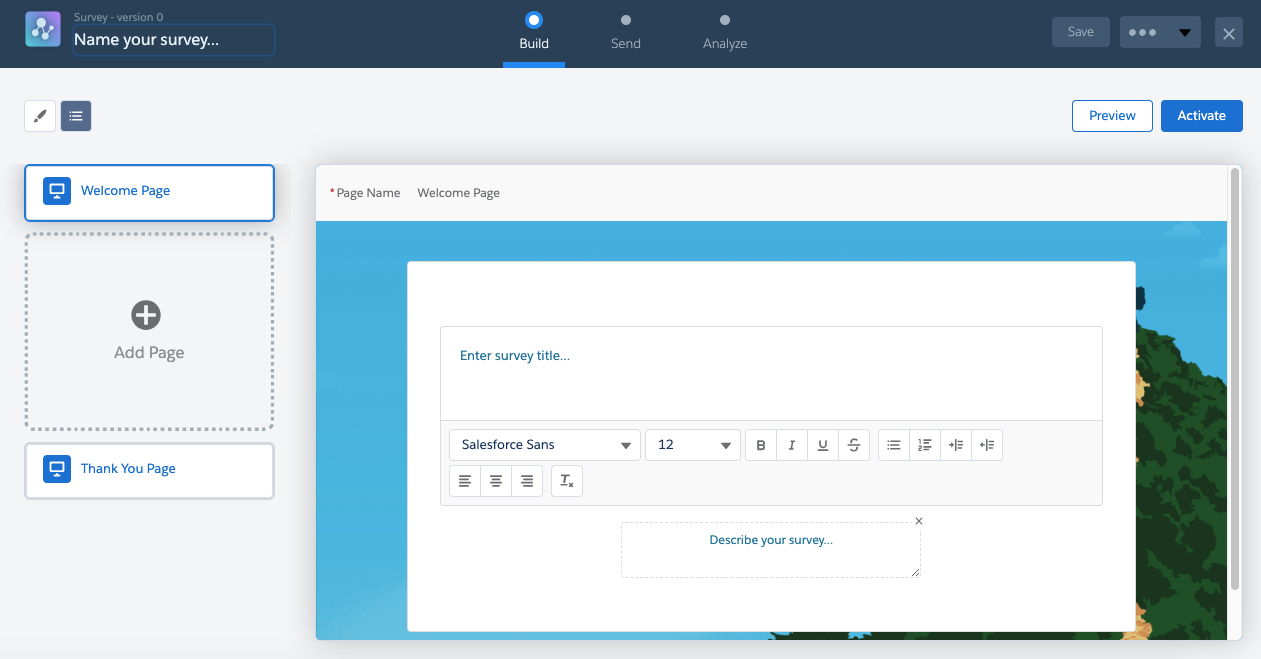 The product was somewhat driven by Health Cloud, providing a way for medical personnel to readily get feedback, in a secure, HIPAA compliant manner, with patients. And, if you had Health Cloud, it was included for all of your users at no additional cost.

Salesforce Surveys allows surveys to be hosted on a simple community (Community Cloud), actually running as an app on your community, so there is nothing to add. If you want community users to access the survey without logging in, you have to allow guest users, and the guest user profile has to have access to the survey objects. There is a Survey lightning component that allows you to add the survey to any community page, allowing anyone with access to the page to take the survey.

For the rest of the Salesforce world (except for Health Cloud customers), you could have one single survey active at a time in your org. You could have unlimited responses to your survey.

In the Summer 19 release, any org Enterprise and above, could create and activate as many surveys as desired. The kicker was that you only can have 300 responses free of charge, After that, you have to purchase additional responses, starting at $300 (USD) per 1,000 responses. (Health Cloud and Financial Services Cloud still can have unlimited responses at no additional cost).

With each release of Salesforce, Salesforce Surveys has introduced new features, such as:

To try it, simply enable Surveys in Setup and get started.

Data related to the survey is stored in the Survey Subject record and can be used to personalize the survey itself. For instance, a case-related survey can show the Case Number and the name of the Case Agent. 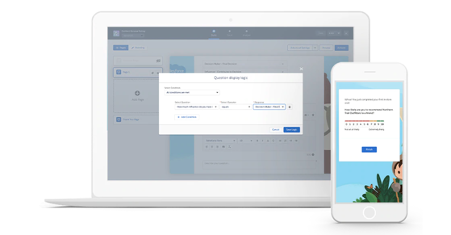 The data in survey responses is more accessible. Any survey response can be mapped to fields on other salesforce objects. Following the case example, a survey sent after a closed case can map an overall score back to the Case record.

The concept of Customer Lifecycle Management is introduced. This overlays Einstein analytics over a system that can send surveys and aggregate scores over the customer’s lifecycle. 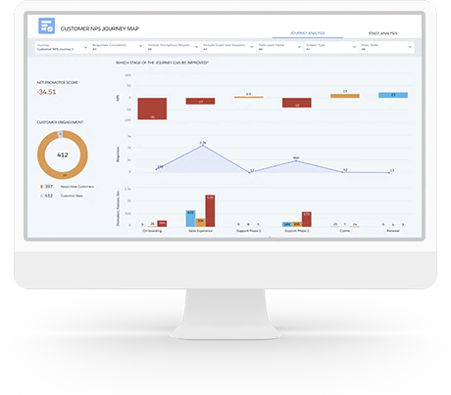 This all requires the Salesforce Feedback Management license (per org/month, includes five Einstein analytic licenses) The price is $42,000 (USD), or $504,000 (USD) a year.

Salesforce Feedback Management is not available in a developer org. Salesforce partners can request that it be enabled in an official partner org.

You read more about the Summer 20 release on the Salesforce Surveys community on Trailblazer.

Surveys on the AppExchange

Early 2014, GetFeedback was launched. The company was started by former Salesforce employees, and Salesforce was an early investor. GetFeedback introduced new question types like NPS (Net Promoter Score) and CSAT (Customer Satisfaction). It also made sure its surveys looked great on your smartphone. The product is still widely used by Salesforce for its own customer feedback. In August 2019, GetFeedback was acquired by SurveyMonkey, another leader in surveys with an AppExchange product. SurveyMonkey’s integration with Salesforce is good, but not native.

As Salesforce Feedback Management was being revealed, Ardira was developing its own product, SurveyVista.

At this point in time, SurveyVista is an extremely competitive product. Feature for feature, it matches up very well with even the Salesforce Feedback Management product. Some of its features include: 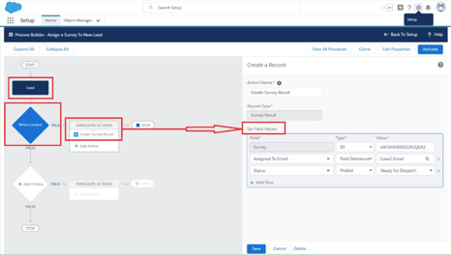 Like Salesforce Feedback Management, Survey Vista is price per org on an annual basis. You get unlimited surveys and unlimited responses. Unlike any of the other products mentioned, SurveyVista works with Professional Edition ($499 (USD) per org annually) and Essentials Edition ($399 (USD) per org annually). Enterprise and Unlimited orgs cost $999 (USD) annually. The AppExchange product is free, but you are limited to 200 responses.

There are a lot of ways to do surveys fully natively in Salesforce now, all are very capable, but it depends on your budget when the prices range from free to very, very expensive. All products can be tried for free, so try them all if you want!

To spread the word on Salesforce Surveys, I started the Salesforce Surveys group on Trailblazer. This group has grown to over 700 members around the world. Other companies, leveraging the flexibility of the force.com platform, have developed survey products that are totally native as well.

2 thoughts on “Do Surveys with Salesforce: Salesforce Feedback Management vs. Salesforce Surveys” 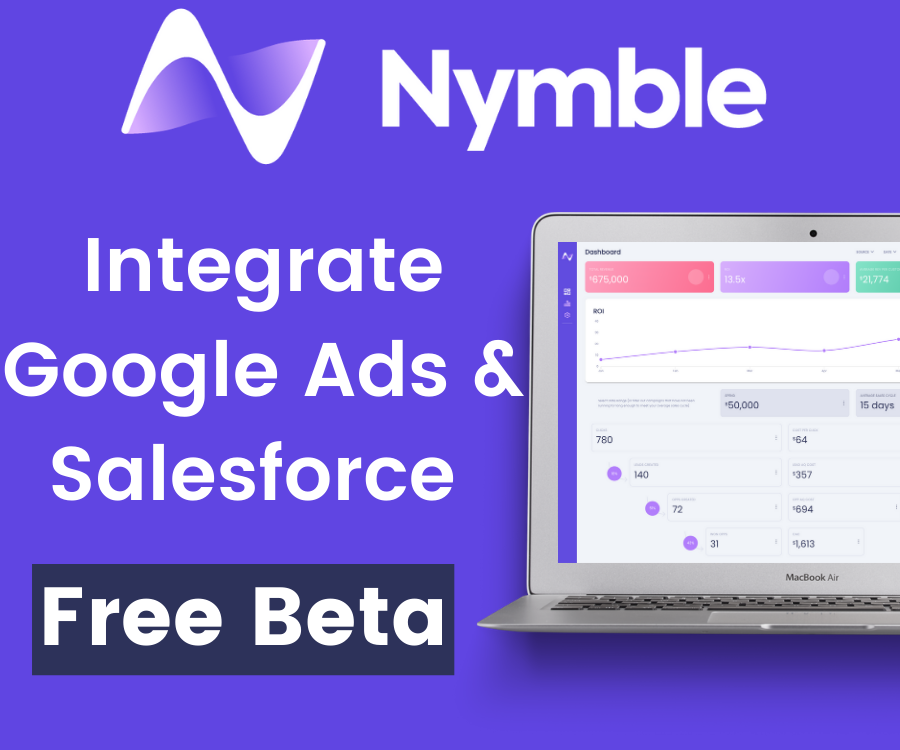