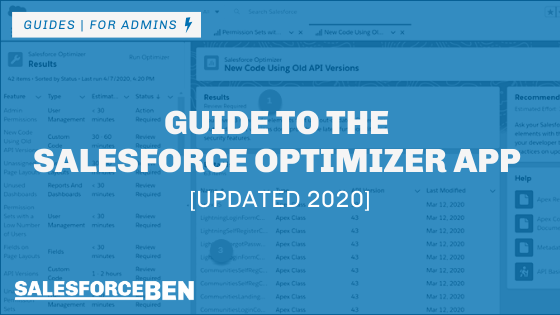 The Salesforce Optimizer Report is a secret weapon, giving Admins an insight into the performance and general health of their Org. Salesforce Optimizer evaluates your Salesforce instance to determine how your company uses Salesforce features, then generates concrete recommendations for how you can optimize feature usage, including ways to simplify customizations and drive user adoption.

Now is the perfect time to learn about Salesforce Optimizer. Coming in Summer ‘20, the report will go from being a PDF download to an interactive app. I was lucky enough to speak with the product team and sneak a peek before the release notes were published, so I can tell you why I’m so excited about this later on!

What the Salesforce Optimizer Report Includes

The optimiser looks at over 40 analyzed features as part of the scan of your Salesforce org. Additionally, it also gives you recommendations on the side component with estimated effort and resources! 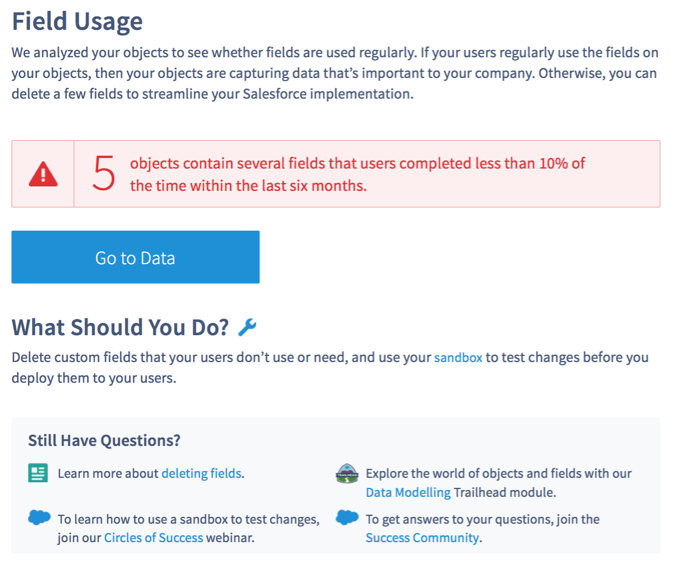 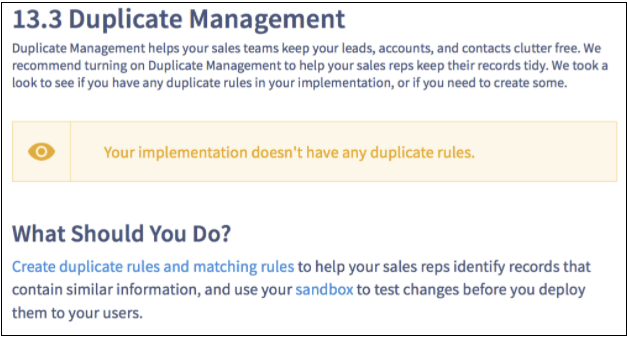 Customisation cleanup: a warning that this object has too many triggers.

Salesforce has included many features and customisations in this first release of the Optimizer, but it may not include all of your Org customisations.

You can find suggestions for:

Just to be clear, Optimizer only has access to your metadata, not your customer data, which is something that may concern organizations before they enable the app.

As I mentioned, I was lucky enough to get sneak a peek ahead of the Summer ‘20 release.

Salesforce Optimizer will go from being a PDF download to an interactive app. before the release notes were published, so I can tell you why I’m so excited about this later on!

(3) The Setup page to make any changes

It reminds me of the Salesforce Labs release notes app that generated tasks for Admins to take action on upcoming features (which was retired, unfortunately).

I mainly look forward to the app because the running the Optimizer report produces records! Records are actionable, they can be contextual, and I imagine measurable (reports, anyone?)

Once Optimizer has run, you can go through the recommendations records and put together a priority list on how you can ‘optimize’ your Salesforce org! Can you imagine being able to add a priority field [1, 2, 3, 4 …] and even a boolean checkbox [Closed?]*

*these are assumptions, on my wishlist.

Another great advantage the app will have over the PDF report is being able to translate the recommendations. Being Salesforce records, these can be translated into end-user languages.

How to Enable Salesforce Optimizer

It’s really quick and easy to setup Salesforce Optimizer. There isn’t a package to install instead, it’s enabled from Setup.  You require the following permissions to be able to run it: Customize Application, Modify All Data, and Manage Users.

Navigate to the Setup menu and search ‘Optimizer’ using the quick search box.

You will see the two options available:

Once the analysis has completed, you will receive an email letting you know when is finished, and if you choose so the generated PDF as a file saved in your Salesforce org.

I was asking the product team about the impact the switch from a PDF to an app could have in terms of performance. Apparently, it shouldn’t have any impact, but I’d be interested to see if there’s anything about data storage when the details are released.

Summary: The Future of Salesforce Optimizer

The Salesforce Optimizer Report is a secret weapon, giving Admins an insight into the performance and general health of their Org. With the Optimiser App coming up in the next release, you will have an interactive way to review and act on the recommendations for maintaining and improving your Salesforce org’s implementation.  It’s a fantastic tool every Salesforce org has at their disposal.

One could argue that running it should be part of your governance process. With the different enhancement projects your organization has in progress, plus the busy business-as-usual, maintaining a suite of features across your org can be (let’s say) intense at times. We have spoken before about The Agile Mindset, things change quickly, to stay competitive we need to inspect & adapt so we can become more efficient. We need to continuously improve, as only learning organizations will keep up with the future.

6 thoughts on “Guide to the Salesforce Optimizer App [Updated 2020]”