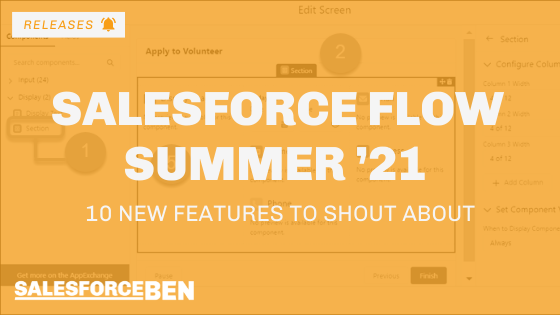 Tim Combridge is an enthusiastic Functional Consultant with a passion for all things Salesforce and loves to share his passion with others.

Every time the Salesforce release notes are published, I get straight to reading them because I can guarantee there will be updates to Salesforce Flows.

Summer ’21 has introduced new improvements to Salesforce Flow – and plenty of them to shout about! Here’s my summary of all that’s coming to Flows and the Flow Builder…

Instead of sieving through your emails to find Flows that have failed,  you can now speed this task up by using the ‘All Failed Flow Interviews List View’ within Salesforce in Summer ‘21.

This list view will show a list of any Screen Flow, Record-Triggered Flow, or Schedule-Triggered Flow that runs into issues, as well as any Autolaunched flows that aren’t triggered. You can customise the list view as you please too!

‘Sections’ was released in beta in Spring ‘21, but it’s now publicly available in Summer ‘21! This means Salesforce will support it as an official feature, and you can feel much more confident when using it in Production builds.

‘Sections’ allows you to configure your Flow Screens with multiple columns, making for a much nicer end-user experience.

This is one of those cool behind-the-scenes updates that helps with general performance. Salesforce now has a cap on the amount of Flow Interview Log Entries that are recorded every hour. The new limit in Summer ‘21 restricts your logs to 75,000 per hour (the original cap of 7 million per the last 31 days still applies too).

Remember back when you had to completely remove the Radio Buttons component when you realised you actually wanted a Picklist? Gross, right? Salesforce agrees! In Summer ‘21, they’ve updated the way these components work and allow you to change the Component Type from within the component itself, rather than having to start from scratch. Massive time saver!

Auto-Layout is a wonderful feature, but as it’s still in its infancy there are a few issues to fix, and a few situations that it doesn’t support. Summer ‘21 brings the ability to create Scheduled Flow Paths from within the Auto-Layout canvas. Very nice!

This isn’t an issue I had previously come up against, but no doubt it would have been at some point in the future if Salesforce hadn’t updated the tool. In Summer ‘21, you can have a five times larger Auto-Layout Flow Canvas when building your Flows. More elements, more complexity, MOAR POWER!

The ability to see your changes in real time is one of Flow’s greatest accolades. One downfall in this area however, is that some elements were not previously able to be previewed – specifically Screen Flow components like Email, Lookup, and Phone.

In Summer ‘21, this all changes. There’s a long list of elements that have been updated to allow for previewing on the canvas: Address, Call Script, Dependent Picklist, Email, Display Image, File Upload, Lookup, Name, Phone, Slider, Toggle, and URL.

This is an amazing update for those who frequently build Screen Flows and want to see what they look like before they debug. A very welcome update!

Here’s what you’re probably used to looking at (prior to Summer ‘21):

Here’s that same screen in Summer ‘21. Soooo much better:

Prior to Summer ‘21, if you had a Picklist component on your Flow Screen, it was required no matter what. You’d need to create a ‘–None–’ Choice value if you didn’t want to force your user to make a selection where it wasn’t required.

Now, in Summer ‘21, all you need to do is uncheck the ‘Require’ box in the component menu and you’re good to go!

The Summer ‘21 release begs the question – why were Picklists so tough to work with in the past? Summer ‘21 makes them look like a walk in the park!

You can use record query, action, or another component (the Release Notes say you can use ‘any flow resource’) as an option in a picklist, not just a predefined Choice.

That’s just a small handful of cool new Flow Features coming in the Summer ‘21 release. There’s a few additional Flow features that I identified in my Treasure Hunt article such as the new Fields menu, the ISCHANGED function, and a bunch of Record-Triggered Flow updates. Be sure to give that article a read for more new Flow Features in Summer ‘21!

Sign up to a Summer ‘21 pre-release org yourself and see what you can find. 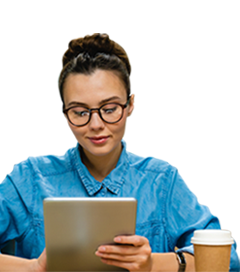